Opening day is fast approaching! As you Force-sensitive frog fans know, Star Wars:Galaxy’s Edge at Walt Disney World will officially open Aug. 29, 2019! The new land inside Disney’s Hollywood Studios® is set to open with one of its two rides, Millennium Falcon: Smugglers Run, in operation. The other headlining attraction, Star Wars: Rise of the Resistance, is set to open Dec. 5, 2019.

There was so much to do and see in that short period of time. We already can’t wait to go back to Batuu and explore some more!

Getting into Star Wars: Galaxy’s Edge at Walt Disney World

Select experiences offer reservations, including Oga’s Cantina, Savi’s Workshop and Droid Depot. Reservations are available up to 180 days out on the My Disney Experience app or at DisneyWorld.com (you’ll also find the experience-specific reservation links throughout this article if you click on the experience’s name!) While reservations aren’t required, they are highly recommended, as there is limited walk-up availability. Cancellations can be made up to the day before the reservation without penalty, but no-shows will be charged. 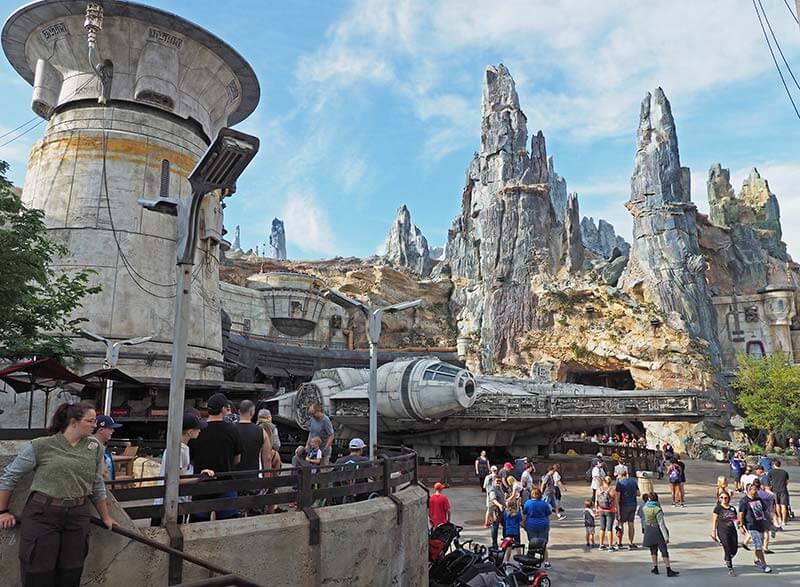 If the name is any indication, Star Wars: Galaxy’s Edge is literally on the edge of Disney’s Hollywood Studios, opposite the park’s entrance and adjacent to Toy Story Land. There are two entrances to the land. You can enter either through Toy Story Land or Grand Avenue (by Muppet*Vision 3D). Guests will find themselves in the Black Spire Outpost on the planet of Batuu. This once-thriving settlement is now home to smugglers, rogue traders, droids and other strange creatures trying to stay out of sight of the First Order. The remote outpost takes its name from the petrified spires that were once ancient, towering trees surrounding the river valleys and plains. As a fellow traveler, you’ll be able to visit a street market, shop in the food stalls and enjoy treats like Blue Milk or head over to Oga’s Cantina for a drink.

Of course, the star attractions of Star Wars: Galaxy’s Edge at Walt Disney World are the rides. The Millennium Falcon: Smugglers Run is basically a life-changing experience. We can hardly wait until Star Wars: Rise of the Resistance opens later Dec. 5, 2019!

Ready to ride the fastest ship in the galaxy? Not so fast! Before you board, you’ll walk through a full-size replica of the Millennium Falcon. This is one queue you don’t want to skip! Can you imagine climbing through the hatch and walking through the hallways before you finally arrive to take a seat inside the cockpit? I’m getting goosebumps just thinking about it! Try not to get too distracted because there is a mission. Space pirate Hondo Ohnaka of “Clone Wars” and “Star Wars Rebels” fame has cut a deal with Chewbacca for use of the Falcon. He will lead you on a secret mission to bring back the loot as you hurl through hyperspace. 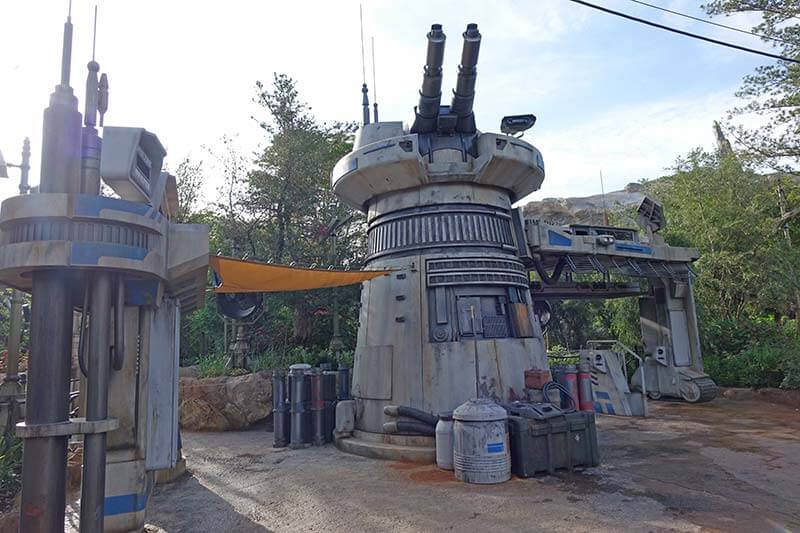 It’s hard to top that, but Disney is billing Star Wars: Rise of the Resistance as the biggest and most immersive Disney Parks attraction ever built! This trackless dark ride puts guests in the middle of an epic battle between the First Order and the Resistance. Less is confirmed about this ride than Millennium Falcon: Smugglers Run, but we do know you’ll board an Imperial Star Destroyer with 50 animatronic stormtroopers waiting in formation. Think you have what it takes to face off against Kylo Ren? You’ll soon find out! FastPasses will not be available upon the ride’s opening. We got to say though, the exterior of the ride looks very promising!

There is a galaxy of new food and drinks to discover at Star Wars: Galaxy’s Edge at Walt Disney World. 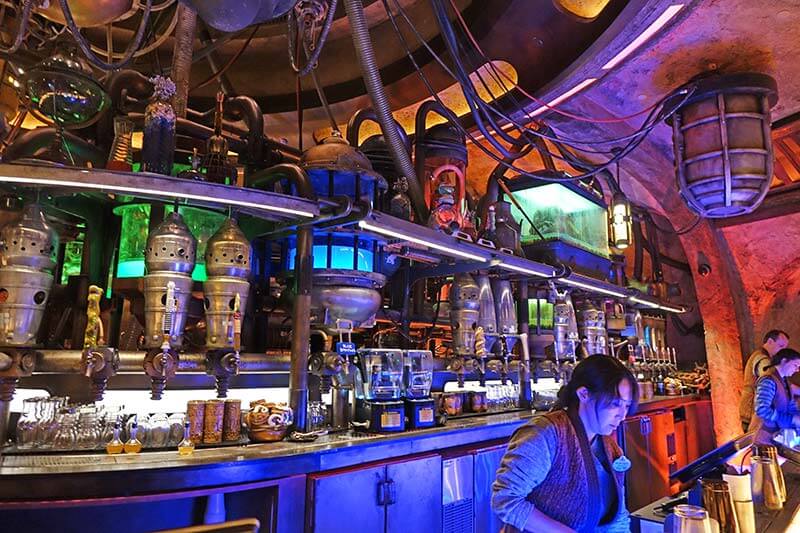 Local Black Spire Outpost watering hole Oga’s Cantina will be the it-spot for adult drinks, mocktails and other beverages. It doesn’t have too many snack options, but the Batuu Bits had a mix of sweet and spicy bites. The cantina will offer mostly standing room only, with Captain Rex, formerly of Star Tours —The Adventures Continue fame, playing DJ. It has a fun vibe with the funky alien music playing in the background. Sometimes the bartenders even sing along!

This will be the place for exotic tastes and flavors procured by one Chef Strono “Cookie” Tuggs, who has traveled the galaxy far and wide after his time at Maz Kanata’s castle on Takodana. Menu items include beef pot roast, shrimp noodle salad, smoked pork ribs, fried chicken, vegetarian kefta.

Former smelter droid 8D-J8 will be turning the spit on tasty meats at Ronto Roasters. A recycled podracing engine does the roasting for this dining experience. It serves breakfast, lunch and dinner with a morning wrap, a Ronto wrap (roasted pork, grilled pork sausage, peppercorn sauce and tangy slaw wrapped in a pita bread) and jerky (comes either sweet or spicy). 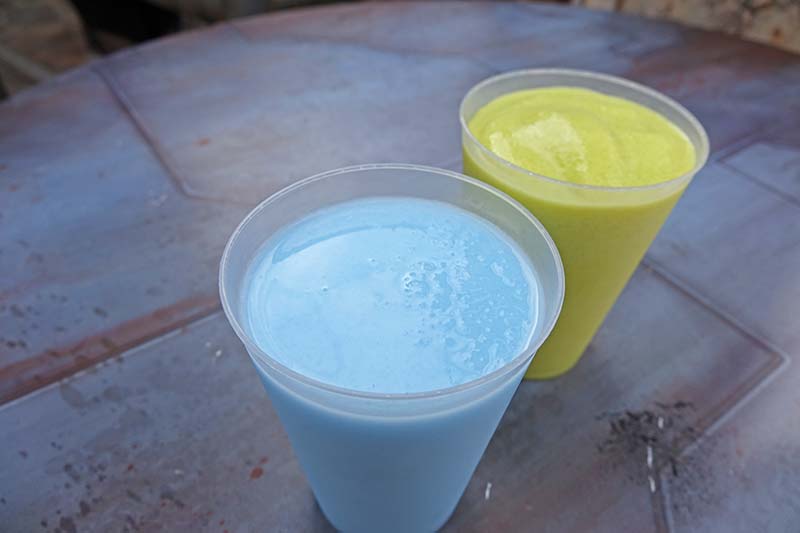 Get your farm-fresh blue milk (or green!) from this stand direct from Bubo Wamba Family Farms. The frozen concoctions, made famous by Luke Skywalker in “Star Wars IV: A New Hope,” are quite refreshing and unlike any milk you’ve ever tasted. Unlike Disneyland® Resort, the Milk Stand in Star Wars: Galaxy’s Edge at Walt Disney World has alcoholic versions of blue and green milk.

Munch on the Outpost Mix, a blend of sweet, savory and spicy popcorn. Momma Frog really enjoyed the unusual flavors. She thought it was similar to kettle corn, but not as sweet.

Both Legacy Vacation Resorts Orlando-Kissimmee & Lake Buena Vista are just minutes away from all these HOT summer attractions and more!

Legacy Vacation Resorts brings all of the Orlando sun and fun right to your doorstep. With just minutes from the major attractions above, families can enjoy an unforgettable family getaway in the heart of Central Florida’s most beloved summer vacation destinations.

Our mini suites, one bedroom, two or two bedroom deluxe condominium accommodations are designed to meet your family’s needs and provide affordable vacation escapes with conveniences like kitchenettes or full kitchens and washer/dryers.